It’s time for the letter H in our cheese glossary. 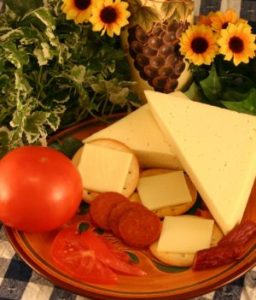 Sometimes called a split. Wheels of cheese are sometimes split horizontally or vertically, mostly so that shops can take less cheese at once.

A semi-hard, unripened, brined cheese made from a mixture of goat’s and sheep’s milk. It is og Greek origin and is salty and slightly squeaky. It can be grilled or fried because it has such a high melting point, making it a great cheese for salads and using as an alternative patty for burgers. It is sometimes aged which gives it a much stronger flavor than the brined version usually available.

Hard cheeses are those that have been aged so that they have a lower moisture content than fresh cheese. They are often dry and crumbly. Hard cheeses include Parmesan, Gruyere, and Cheddar.

A tool with cutting wires used to cut the curds.

Cheeses that are well-aged and easily grated. Often they are used in cooking or at the table to add a finish to a dish. These include Parmesan, Romano Pecorino and Asiago.

Havarti Cheese or Cream Havarti (Fløde Havarti in Danish) is a semi-soft Danish cow’s milk cheese. It is rindless, with a smooth surface and a cream or yellow color depending on the type. It has very small and irregular eyes (holes). It has a buttery aroma and a generally sweet taste with a slightly acidic tang. Havarti can be sharp in the stronger varieties, resembling Swiss cheese. It is a washed curd cheese, which contributes to the subtle flavor of the cheese. The cheese will usually be aged for around three months and as it ages it becomes saltier and nuttier.

We also stock Havarti with Dill and Havarti with Caraway for those looking for additional flavor. Dill combines the flavors of fennel, anise, and celery, with a slight bitterness, whilst caraway has a very pungent, earthy anise flavor.

Milk that is subjected to heat in order to eliminate pathogens and organisms, but at a lower heat than is required for pasteurization. This can have less of an effect on the taste than a full pasteurization process.

A process that breaks down the fat globules found in milk and then incorporates them. This stops the cream from separating and rising to the top.

The process of putting fresh curds into mold forms.

This is simply a term for the response a cheese has to heat.

As always, please get in touch if there is something you want to learn about cheese that we haven’t yet covered! We’re always keen to add more to the cheese glossary as we go along.