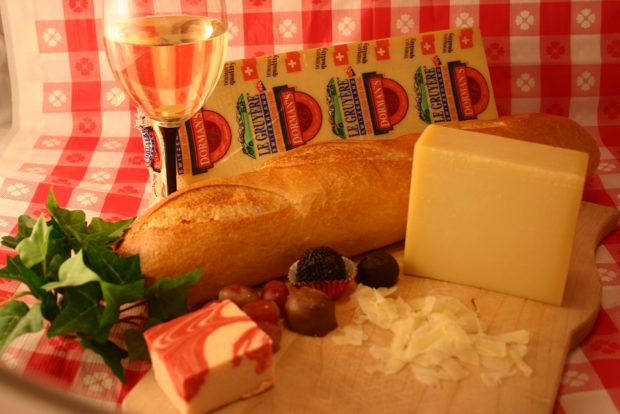 Gruyere (groo-yair) is one of our favorite imported cheeses.  Some call it a French cheese while others insist it is from Switzerland.  It originated in the Alpine region between Switzerland and France in the eleventh century.Gruyere Cheese is sweet but slightly salty. It has a flavor that varies widely with age. It is often described as creamy and nutty when it is young, becoming more assertive with age , earthy, and complex. When fully aged (five months to a year) it tends to have small holes and cracks which impart a slightly grainy mouthfeel.

Gruyere cheese is generally known as one of the finest cheeses for baking, having a distinctive, yet not overpowering taste. In quiche, gruyere cheese adds savoriness without overwhelming the other ingredients. It is a good melting cheese, particularly suited for fondues, along with Vacherin and emmental (commonly known Swiss cheese). It is also traditionally used in French onion soup, as well as in croque monsieur, a classic French toasted ham and cheese sandwich. Gruyere cheese is also used in chicken and veal cordon bleu. It is a fine table cheese, and when grated, it is often used with salads and pastas. It is used, grated, atop le tourin, a type of garlic soup from France which is served on dried bread.

While gruyere cheese is often designated as a French Cheese, it actually originated in Switzerland.  It was named after the town of Gruyères in Switzerland, and originated in the cantons of Fribourg, Vaud, Neuchâtel, Jura, and Berne. Before 2001, when gruyere cheese gained Appellation d’Origine Contrôlée (AOC) status as a Swiss cheese, some controversy existed whether French cheeses of a similar nature could also be labeled Gruyere cheese. (French gruyere-style cheeses include Comté and Beaufort.) French gruyere-style cheeses must have holes according to French agricultural law, whereas holes are usually not present in Swiss gruyere.

Be the first to review “Gruyere Cheese” Cancel reply