Cheese Glossary: The Letter B We continue our Cheese Glossary with the letter B! 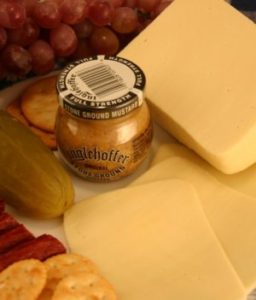 A close relation of Swiss cheese, but Baby Swiss is made by substituting water for the milk’s whey in the cheesemaking process. This slows the bacterial action and produces smaller holes and milder flavor than Swiss cheese.

This cheese isn’t actually made from beer! It is a semi-soft combination of Limburger Cheese and Brick Cheese that has a very strong smell and taste. Best enjoyed with rye bread, sliced onion, and a glass of beer.

A medium-soft cheese made in the form of a large rectangular or brick shape, although it may also be named “brick” because the cheese curds are pressed with clay-fired bricks. It has a sweet, mild flavor when young but matures into a strong ripe cheese.

A light white powdery rind that develops on cheeses such as Brie and Camembert. It develops when the surface of the cheese is coated in a Penicillium spore.

Any cheese that has had a culture of Penicillium added to it. This produces blue veins or spots through the cheese. They are often aged in a temperature- and moisture-controlled environment, such as a cave.

A cheese that has been brined has matured in saltwater. These include Feta, Halloumi, Gouda, and Gruyere. The salt is used to prevent the growth of bacteria, even in hot conditions. Most brined cheeses will taste clean, salty and acidic. Some brined cheeses are also known as washed rind.

Sometimes cheeses are brushed, either by hand or by a machine, to help them stay moist as they ripen.

Which terms would you like to see added to the cheese glossary? Let us know in the comments below!