Cheese of the Month: Asiago

March’s cheese of the month is… 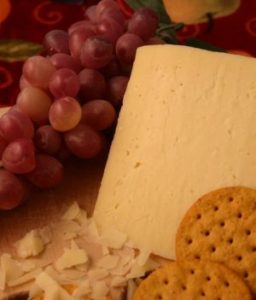 It is popular as a table cheese and is good when enjoyed with crackers, fruits, and red wine. It is treated as interchangeable with parmesan and romano cheeses in some cuisines.

Asiago Cheese is an Italian cheese named after a region in Italy where it was first produced. This region is known as the Asiago High Plateau, which lies within the Italian Alps. As far back as the year 1000 AD, Asiago cheese was produced by farmers in this region for use locally. Now, it is manufactured commercially in northeast Italy, specifically in the provinces of Vincenza e Trento, Padua, and in Treviso.

For a vegetarian dish, try roasted cauliflower with a cheese sauce. Add toasted flaked almonds for a crunchy topping or even some raisins if you like sweet and savory dishes.

Like many Italian cheeses, it is fairly universal when it comes to wine pairing.  It is more commonly paired with reds such as Beaujolais, Cabernet Sauvignon, Merlot, Pinot Noir, Syrah, and of course Chianti.  For those who prefer white wines, Asiago cheese also pairs well with Chardonnay, Riesling, or Sauvignon Blanc. If you like to try cheeses with beer, we recommend an IPA or a Saison style beer, as the fruitiness will work well with the cheese.

Have you tried this cheese? What’s your favorite way to eat it? Let us know in the comments! We know that sometimes time is a factor in your cooking decisions, which is why today we are sharing a 10-minute pasta sauce that you can whip up with plenty of time to spare.

Pop your pasta on the stove and you’ll have a sauce ready in the time that it takes to cook.

1 tin chopped tomatoes (or fresh as an alternative)

If you do have an afternoon free, why not try making fresh pasta to go with your sauce? Read on for the recipe!

You can simply use a rolling pin to roll pieces of the dough until they are lovely and thin.

If you have a pasta machine, the best thing to do is follow the instructions that it comes with as some have different mechanisms. In general, though, this will be your basic method.

For lasagne or tagliatelle, you will simply need a sharp knife to cut the pasta to the desired shape. Your pasta machine may have attachments to cut the pasta. If you are shaping the pasta we recommend finding video instructions that will show you the quickest method. Get the family involved to get the pasta ready before it dries!

To cook your pasta: