The biggest football game of the year is right around the corner!  Don’t let your snack game pale in comparison.  Here we have some fun ideas for presentation and taste purposes and a Shisler’s shopping list to make sure your snacks pack the same wow factor as the game!

This first one has my heart.  Bacon and Swiss?  Nuff Said!

Dubbed the best cheesy bacon dip in the world by AllRecipes.com, this is sure to make mouths happy on Super Bowl Sunday. Just take some bacon, cream cheese, mayo and shredded Swiss and melt it all up into a ooey, gooey and delicious mixture.  Top with bacon and chives and serve warm with crackers and Voila!  Easy, cheap delicious and..well, probably not nutritious.  But two outta three ain’t bad!

Get the full recipe.

For a cooler version of a cheesy, meaty and delicious dip, try this Summer Sausage Cheeseball recipe from An Affair from the Heart.  It’s just five ingredients, 15 minutes of kitchen time and 100% satisfaction rating! If the New Year still has a resolution on it and you’re cutting the carbs, try making up some skewers.  Cheese, sausage and pickled items are a winning combo whether you’re carb friendly or not and we have everything you need to whip up some skewers in our store.  Simply take a selection of meats and cheeses and cut them into cubes, skewer with a selection of pickles and pickled peppers and serve them up with a side of spicy mustard. 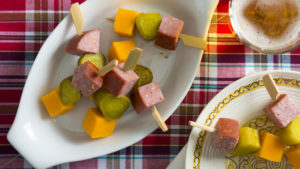 And finally…Build a Snack Stadium!

This one wins  a touchdown for presentation.  It’s the godfather of charcuterie boards and, although it may take a bit more time than some of the other snacks we have mentioned today, it will be sure to score the “extra point” with your party people. The one described in this DIY article on Buzzfeed was constructed for an extremely large gathering.  With that likely off the table this year, use this more as a guideline for a smaller scale.