Home/Seasonal/Ohio State Buckeyes Football is Back!

Ohio State Buckeyes Football is Back! And the #1 ranked Ohio State Buckeyes will play their first game of the season this Saturday at 10:25AM in the infamous Horseshoe (The Shoe)!

“Every game is a home game.”

The Buckeyes will face Nebraska in a seemingly empty stadium this weekend.  When the Big Ten decided they would reinstate football with a late start this season, they decided it best to avoid the crowds teetering over 100k in number. 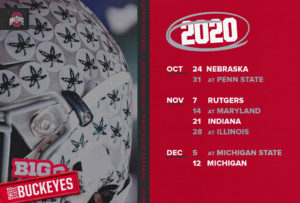 This weekend, the Buckeyes will play to around 1600 in-person fans (friends and family) with “the best damn band in the land” and the cheerleaders absent from the festivities.  ”Skull Session” pep rallies at the adjacent St. John Arena will also leave a void on Game Day for this season.  In an effort to promote social distancing, tailgating is also banned from the area surrounding the iconic stadium this year.

For die hard Buckeye fans, like myself, this may be a hard pill to swallow.  But, at least the boys are back on the field and able to compete for the National Championship once again!  Go Bucks!

So, all of this means we just need to up our stay-at-home tailgate games…We should have some pretty decent practice at creating the party at home by now, right?

We have you covered for all of your half-time snacks at Shisler’s.

Get the party “kicked off” to a great start with one of our football season special baskets!  For only $36.99, you can pick up a bundle of goodness containing Troyer’s Trail Bologna, Swiss Cheese, Shisler’s Private Label Mustard & Hot Pepper Relish and a box of Carr’s Crackers. 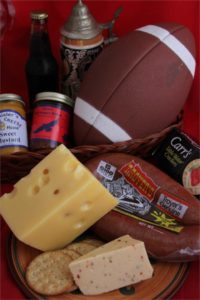 Get your Football Saturday Snacks!

If you want more of a meal for your seasoned football fan friends, pick up a Streb Meats Boneless Smoked Ham and some Sweet Mustard for some killer sandwiches!

You can watch the Buckeyes on Fox this Saturday morning.  For the full experience, queue up “Hang on Sloopy” on your playlist and let the good times (and touchdowns) roll.