Last week we posted some pictures of some AMAZING Hungarian Cookies that have been a huge hit.  Both the online response and in store sales have been overwhelming.  So, we wanted to take a few minutes to give you a little info on the history of these cookies and the bakery that makes them!

There are several types of these cookies that are available at Shisler’s right now. According to the owner of Kiflis Bakery and Cafe:

“The flower shaped ones are called Spitzbuben. The ones with the folded corners are called Kolachky usually, but also Kifli. It’s kind of hard to explain because every country in the region has their one different take on it. Hungarian, Polish, German, The crescent shaped ones are all considered Kifli too. But people call the folder over ones Kifli.”

Today we are going to focus on Kiflis. What are they and where do they come from?

A Kifli is a cookie made with light and flaky pastry dough that is generally filled with something sweet like jams or preserves.  Traditionally an Eastern European Christmas treat, in recent years the growing popularity of the Kifli has made it a year round staple at family gatherings, weddings and other special occasions.

Origins of these cookies trace back to ancient times.  Originally made into a crescent moon shape, the slightly sweet treat was thought to be an offering to the goddesses.  Another myth surrounding these cookies is that they originated when Christian forces freed Buda from the Ottoman occupation in 1686.

Thought to have originated in Vienna, the original Kifli are much different than the version served widely in Hungary today.  They were savory, crescent shaped breads and sprinkled with poppy, sesame or caraway seeds and sometimes accompanied with jam.  It has been thought, or rather assumed, that the Kifli was the inspiration for a lovely treat we all know and love…The Croissant! 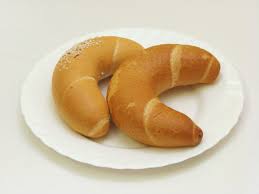 A version of the original Kifli

Located in South Central Europe, Hungary has inherited many recipes from neighboring ethnicities over the centuries.  As the evolution of cuisine and the migration of Viennese travelers made tracks through time and continents, so evolved the Kifli.  There are many varieties of these cookies throughout Europe, but none are the same as the original.

Eventually, the sweet stuff found its way inside of the pastry…And on top of it!   The version of Kiflis we are most familiar with is filled with preserves or walnut paste and rolled, while warm, in powdered sugar. A bit about our local retail partner…. As we lead into the holidays, Kiflis Bakery and Café in Cuyohoga Falls is generous enough to bring these delicious cookies, as well as other delicious Hungarian baked goods, to our shop in Orrville.  I asked them for a little history on their shop and here is what they said:

“We started our bakery in 2001 with a little booth in front of our house in Akron and it grew from there. Our wholesale bakery supplies roughly 40 different mom and pop grocery stores as well as some seasonal farmers’ markets.  We have a dining room where we serve ethnic foods as well as traditional American foods.  All of our pastries in store as well as imported groceries.” This lovely food stuffs store, cafe and bakery are family owned and operated.  When the owners arrived from Yugoslavia in 2000, they recognized a need for these ethnic foods.

“There are a lot of us immigrants in the Akron area and we saw that there was a need for our traditional foods so we opened our own!”

We currently have a selection of these Eastern European treats in the store, but they are a VERY popular item and go very quickly.  So come and get ‘em while we got ‘em!