Cooked bacon adds smoky flavor to the cheese and bread crumb topping in this flavorful and creamy macaroni and cheese casserole. Feel free to make it without the addition of green onions. I thought they went well with the bacon flavor, but if you’re not a fan of onions, you can leave them out. Serve this macaroni and cheese with sliced tomatoes or a tossed salad for a satisfying family meal.

Cook macaroni in boiling salted water following package directions. Drain the macaroni in a colander, rinse with hot water, and set aside.

In a medium saucepan over medium heat, melt the 3 tablespoons of butter. Add the green onions and garlic powder. Cook, stirring, for about 1 minute. Add the flour and stir until well blended and smooth.

Set 1/2 cup of the shredded cheese aside and  stir the remaining 1 1/2 cups of cheese into the sauce. Continue cooking and stirring until the cheese has melted.

Combine the cheese sauce with the drained macaroni and then spoon the mixture into the prepared baking dish. Sprinkle bacon evenly over the casserole and then top with the reserved 1/2 cup of cheese.

Toss the bread crumbs with 1 1/2 to 2 tablespoons of melted butter and sprinkle over the casserole. Bake for 25 to 30 minutes, until lightly browned and bubbly.

Stop by Shisler’s Cheese House and let us help you make this tasty lunch or dinner creation with our supply of smoked bacon and sharp cheddar!

Dairy products are important for good overall health, especially its contributions to our bone health. Eating cheese and other dairy products are also known to promote dental health as they help protect teeth against cavities, according to a study published in the an issue of General Dentistry

In the study conducted for that publication, researchers randomly assigned 68 participants aged 12 to 15 to one of four groups: cheese, milk, sugar-free yogurt or control (paraffin). The subjects chewed or swished their product for three minutes and then swished their mouths with water. Researchers measured the dental plaque pH level at four sites in each participant’s mouth at a period before consumption and then at periodic intervals at 10, 20 and 30 minutes after consumption of these products.

The subjects in the milk, sugar-free yogurt and paraffin groups had no real significant changes in the overall pH levels in their mouths. The pH levels for those who ate cheese, however, increased rapidly and dramatically at each interval following consumption. This would suggest that cheese has anticavity properties and that eating cheese could help fight the dental battle against cavities and plaque build up.

A pH level lower than 5.5 puts a person at risk of tooth erosion, which is a process that wears away tooth enamel and opens the door for plaque build up and tooth decay. “The higher the pH level is above 5.5, the lower the chance of developing cavities,” explains Vipul Yadav, lead author of the study.

The study results illustrated that the rising pH levels in the cheese group might have occurred because of increased saliva production, which could have been caused by chewing through the cheese itself. Also, various compounds found in cheese itself may adhere to tooth enamel and help protect teeth from acid that would otherwise eat away at the enamel on teeth, leading to tooth decay.

“It looks like dairy does the mouth good,” says Academy of General Dentistry spokesperson Dr. Seung-Hee Rhee, “Not only are dairy products a healthy alternative to carb or sugar-filled snacks, they also may be considered as a preventive measure against cavities.”

From an early age, we are encouraged to drink our milk. To the inevitable question “why” comes the response”, milk is good for you because it aids in the building of strong bones and teeth.” The same holds true for the other members of the milk family like yogurt and cheese. Dairy products are also good sources of protein as most nutrition programs suggest several portions of dairy products per day, more for young, growing children or pregnant or breast-feeding mothers.

All products that are derived from dairy or milk are good sources of calcium, an essential nutrient for the development of strong and healthy bones and teeth. Eating cheese results in a coating of calcium on the teeth that helps protect against cavities and helps fight the battle against plaque build up and tooth decay. Eating a cube of cheese can increase plaque-calcium concentration by up to 112%, helping to strengthen teeth and aid in the prevention of softening which leads to cavity development. Further studies show that cheese also prevents tooth demineralization and while promoting remineralization of the tooth. This is true whether the cheese is eaten raw or has been cooked.

But it turns out that eating cheese may be good for your teeth in more ways than one. Eating cheese may help reduce the incidence of cavities. When food is eaten, the pH often drops as the mouth becomes more acidic from the foods that are chewed. Teeth are very sensitive to acid and it appears that eating cheese helps maintain a pH level in the mouth that is safe for maintaining dental health and strong teeth. Under experimental conditions, it was shown that the pH drop following consumption of a 10% sugar solution was 4.26, but when the sugar solution was eaten after cheese, the pH dropped to only 6.48.

Let Shisler’s Cheese House be your dental health supporter as we have a wide selection of cheeses that can bring out that beautiful smile of yours!

Sharp Cheddar: An Explosion of Flavor

Imagine life without the presence of Cheddar Cheese or some form of it… Yep, it’s hard to imagine life without cheddar cheese — there’s a block of it in the fridge of nearly every household, ready to be sprinkled onto scrambled eggs, melted within grilled cheese sandwiches or stirred into cheese sauce for homemade macaroni and cheese.

Cheddar cheeses can becoming confusing with its complexities of flavors and appearances: some are white, some are yellow or orange, and some cheddars are mild, sharp or extra sharp. Cheddars seem to be the only cheese with that distinction, so what does it all mean?

How is Cheddar Cheese Made?

Before we get to talking about sharp cheddar cheese, to begin, let’s delve into what cheddar is in the first place. It’s a cow’s milk cheese that originated in the village of Cheddar, England and has since grown immensely, taking the nation by storm, becoming one of the most popular and inexpensive cheeses in the US.

The cheddar-making process starts out like most other cheeses: the milk is cultured, a process in which starter bacteria is added to acidify the milk. When a sufficient amount of acid is produced, rennet is added and milk curds are formed. Upon the formation of these curds, the excess watery whey is drained out to leave behind mostly concentrated curds. These concentrated curds are then heated to about 100° F to release even more excess, watery whey and sequentially, begin the process of melting these curds together.

It’s at this point that cheddar continues on a different path,as compared to other cheeses, in cheese-making called the cheddaring process. The curds are formed into big slabs that are the piled together and flipped over several times, getting denser with each flip while releasing more of this watery whey. It is at this stage that the pressed curds are sent through a mill that produce smaller curds again before being pressed into molds to drain further and begin the aging process.

The Many Colors of Cheddar…

Why is some cheddar white while other variations of cheddar are yellow and others, orange? Historically, cheddars made in New England were not dyed and left white, while cheddars made elsewhere were dyed with things like annatto to help readily distinguis the cheddar’s origin. Today, it’s just a sense of consumer preference and both dyed and undyed variations of cheddar are still produced for consumption. 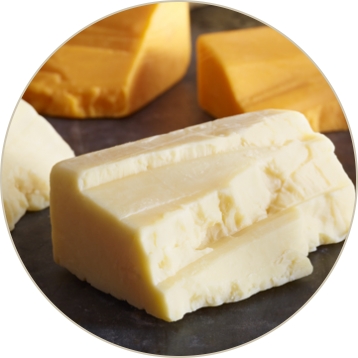 Cheddar cheese is one of those unique cheeses in the dairy industry that has a its own descriptor before it, “sharp”. It’s carries this label rather loosely and is not regulated, so designations can be and tend to be inconsistent across various brands.

Sharp is a term that illustrates how cheddar changes in its flavor and texture over a period of time; for simplicity’s sake, sharp is used for cheddar as it ages… the stronger the bite, the longer it has been aged. Milder variations of cheddars are generally aged 2 to 3 months, sharper variations are aged 6 to 9 months, and extra-sharp are generally aged 1 to 2 years, before the final product. As cheddar ages, it goes from mild to tangier with more complex, deeper and bolder flavors. Its texture also goes from smooth and creamy to developing hard, salt-like crystals called calcium lactate. So, next time when you’re biting into an aged, Sharp Cheddar, and feel a crunch, it is these crystals that are producing this distinct crunch.

The best way to understand the age and sharpness of cheddar is to taste two different ages of cheddar side-by-side. Go with the same brand if possible to have a fair comparison and begin the aged cheddar tasting experience! Only then will you know if you like mild and creamy or nutty, tangy and bold.

Whether just nibbling on cheddar or planning a dish involving Sharp Cheddar, the best practice is to go with the age (sharpness) of cheddar you think tastes the best. On the contrary, cooking with cheddar is an entirely different tale. The more aged the cheddar is, the less moisture it contains and the greater the heat needed to melt it. Mild or sharp cheddars melt the best, while aged cheddars tend to share melting behaviors similar to Parmesan cheese.

There you have it…. everything you need to know about cheddar and how to pick the right one at your local grocery store or specialty store. Shisler’s Cheese House carries a great selection of mild and aged cheddar cheeses!