Here at Shisler’s Cheese House, we have a number of products on sale which will help you create an amazing Bologna spread for any occasion.

This recipe is super easy to create and at our store, we have high-quality bologna and cheese which would be perfect for this spread.

The bologna recommended for this recipe is Lebanon Bologna. You can buy 12 Oz. for only $6.29 at Shisler’s Cheese House, be it in store or on our website. Our Lebonan Bologna is a type of cured, smoked, fermented, semi-dry sausage. It is similar in appearance to Salami, just slightly darker in color. The flavor is distinct and tangy, which makes it delicious.

Also included in this recipe is a cheese, we recommend you use our Colby cheese. However, the choice of cheese is entirely yours and you can look through our wide selection! Cut the bologna and cheese into large chunks.

Using a meat grinder, grind the bologna, cheese, and eggs into a large bowl.

Serve on crackers or make a sandwich with the spread.

Fall is such a refreshing time of the year, the kids are back at school, the weather is cooling down, Halloween is just around the corner and most importantly, the Football Season has begun! Come on down to Shisler’s Cheese House and check out these amazing gift boxes packed with dreamy treats for our Fall occasions!

If you are out of state, you can always visit our website and order your goodies online to be delivered straight to your door.

Going back to college this Fall? Come down and get yourself our ‘Back To School Care Package‘! This gift box is perfect for students going back to college as it contains a selection of popular foods amongst young adults. If you are feeling homesick, these home comforts will help with that. You can share these treats with your friends and dorm mates, make a night of it! The good thing about this care package is that the items do not require refrigeration and are not very perishable.

This gift box is also rather good for military service men and women. Sending them a piece of home overseas is a perfect gesture.

The gift box contains generous amounts of the following items:

Taste the most amazing flavors of Fall in Amish Country without ‘Fall Harvest Collection‘ gift box! What better way to welcome Fall into your home than enjoying our Fall Harvest Collection fresh from Amish Country. Not only will you be tasting the flavors of Fall, you will be supporting the local Amish community with their fresh and high-quality products.

This package is only available for a limited time. 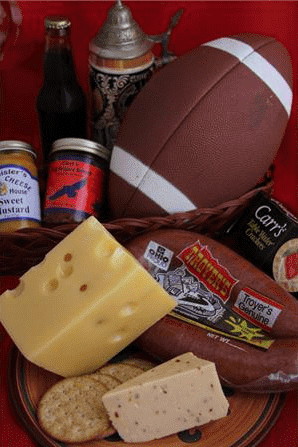 What’s better than cheese and bologna while watching your favorite team win? Nothing is better than that! Order your Football Season gift box today ready for the weekend and all things Football. Our gift box is tailored for sport’s fans, containing a custom spread of cheese and trail bologna!

Don’t Miss Out On The History of Lebanon Bologna Resembling salami in texture and appearance, Lebanon Bologna is an all beef, semi-dry, fermented, smoked and cured sausage. This dark colored sausage comes with a distinctive tangy flavor. The traditionally prepared versions of this sausage are infused with a strong smoky flavor through hardwood smoking.

The origins of Lebanon Bologna can be traced back to the Pennsylvania Dutch. It was strongly influenced by the European slow-cured sausages. In Pennsylvania, this sausage is served as luncheon meat and continues to be popularly available. This sausage is produced in Lebanon County, Pennsylvania, from where it derives its name.

Bologna was patterned and developed based on German slow cured products by German immigrant farmers settled here. Lebanon Bologna is one of the most unique sausages made in America though it has its origins in Europe.

Since the 18th century, Lebanon Bologna has been popular food stuff in the Pennsylvania Dutch Country. This identity food is an intrinsic part of the distinctive culinary heritage of south eastern Pennsylvania. Those who were born and grew up here ate many a slice stuffed in sandwiches smeared with cream cheese or served fried with eggs.

Lebanon Bologna comes in four different flavors namely the original, double smoked, sweet and honey smoked. Realizing the undesirable effects it can have on quality of the final product, very high heat is not used to manufacture this sausage. Thermal processing thus does not exceed 120 °F (49 °C). As high heat is out of question, microbial growth is controlled through other processes and ingredients.

In order to allow for reduction of nitrate to nitrite and for lactic acid bacterial enrichment, the stuffed and blended beef sausage is aged at least for ten days before it is smoked. The smoking phase lasts for four days during which fermentation continues to occur.

Most manufacturers today use good quality lean beef. Savory spices are added in a special blend; the bologna is seasoned and smoked naturally in wooden smokehouses outdoors. Bologna is then cured in a gradual manner over hardwood fires that are hand tended.

As Lebanon Bologna’s distinctive taste comes from the slow smoking method, all manufacturing units have smokehouses constructed of wood in old designs. Walk inside the smoke house and you will be transported right back to ancient times.

Lebanon Bologna was once a seasonal product available only during the November butchering season. Today it is commercially produced throughout the year.

Stop by Shisler’s Cheese House or check out our website and enjoy Lebanon Bologna today! @ $8.99 per lb.