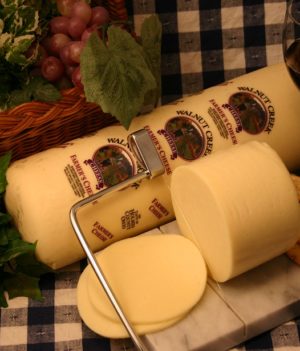 The cheese glossary continues with the letter F!

Farmer’s Cheese is a mild, unripened white cheese made by adding rennet to cow’s milk. When the milk coagulates it separates into solid curds and liquid whey, which is drained off.  The result at this stage is sometimes referred to as pot cheese.  Further pressing out of the moisture results in a more firm and crumbly Farmer’s Cheese. It is often used in recipes including Blintzes and Pierogies. One popular local use is to lightly fry Farmers Cheese and eat it in a sandwich, but our favorite is to slice it very thin and roll it with our flavorful smoked meats. It is also known as a cheese that has fewer calories and less fat and cholesterol than many other cheeses.

This means a cheese that has been made on a farm with that farm’s own milk. If you have a chance to try a farm-made cheese it can often offer a specific taste unique to that area. This is also called farmhouse, farmstead, or fermier cheese.

This can be used to describe the smell of cheese as having the quality of fermented alcohols.

A Greek cheese made from goat’s and sheep’s milk. It is a fresh cheese that is usually sold submerged in brine. It has a salty, tangy taste and a high moisture content. It is often used in salads and combines well with fruit, but can also be baked.

This can refer to several things:

Cheese varieties which are relatively inelastic and unyielding in texture. Firm cheeses include Cheddar and Romano Pecorino.

Speeding up the ripening of a cheese by using a warmer environment than normal to naturally ripen the cheese or by changing the enzymes added.

The Italian word for cheese!

Typically these are cheeses that have not been aged or cured. They usually have a delicate, tangy flavor from the lactic curdling. Fresh cheeses can be better for melting as they have so much moisture. These include Ricotta and Mascarpone. Some cheeses that are described as ‘fresh’ have been cured for a very short time, such as Feta.

This means a cheese that crumbles easily.

The French word for cheese!

A description of the sweet, fragrant aroma or flavor of some cheeses.

As always, let us know if you have any questions or words for us to define in the cheese glossary in the comments below.