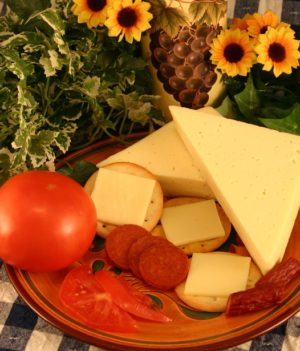 It’s time for the letter E in our cheese glossary!

A description of flavor – hearty, rustic taste and aroma. Many sheep’s and goat’s milk cheeses will taste earthy.

Edam cheese was first produced in the Netherlands after the town in which is made. It has a pale yellow interior and is usually encased within a crust of red paraffin wax. Its flavor is mild, salty and nutty at the early stage. It becomes sharper with aging. It is comparatively low in fat content when compared with other cheeses.

A yellow, medium-hard Swiss cheese that originated in the area around Emmental in Switzerland. It has a mild, slightly fruity taste. It has large holes produced by the fermentation process which introduces air bubbles into the cheese.

A substance or mixture used to create a smooth body and texture, particularly in processed cheeses.

Protein or protein-like compounds that act as catalysts in the breakdown of many substances. They act on the proteins such as casein in cheese to separate them from the whey. The ones used in cheesemaking include rennet and pepsin.

This is a soft cow’s milk cheese produced in the village Époisses, France.  It has a creamy, chewy and firm texture and a very pungent smell. It is categorized as a smear-ripened cheese washed in marc de Bourgogne and takes on a red-orange color as it takes 6 weeks to mature fully. Its flavor is spicy, sweet and salty.

A hole within cheese caused by the formation of trapped gas as a result of fermentation
during the curing process. Eyes are typically found in Swiss-type cheeses. The natural bacteria consumes the lactic acid in the cheese. This releases carbon dioxide gas, which forms bubbles that become the holes in the cheese. Our Amish swiss cheese, made in Northeastern Ohio, is especially flavorful because of the longer aging process that it undergoes, at a higher temperature than younger cheeses. This produces larger eyes, which is sometimes seen as an indicator for better flavor.

A cheese that has been aged for between 2 and 7 years. It does not have to have a specified year. You will find that extra aged cheeses are highly flavored with deep, savory notes. They can sometimes become slightly crumbly as they age.

Are you enjoying the cheese glossary? What has been your favorite thing to learn about so far? Let us know in the comments below!