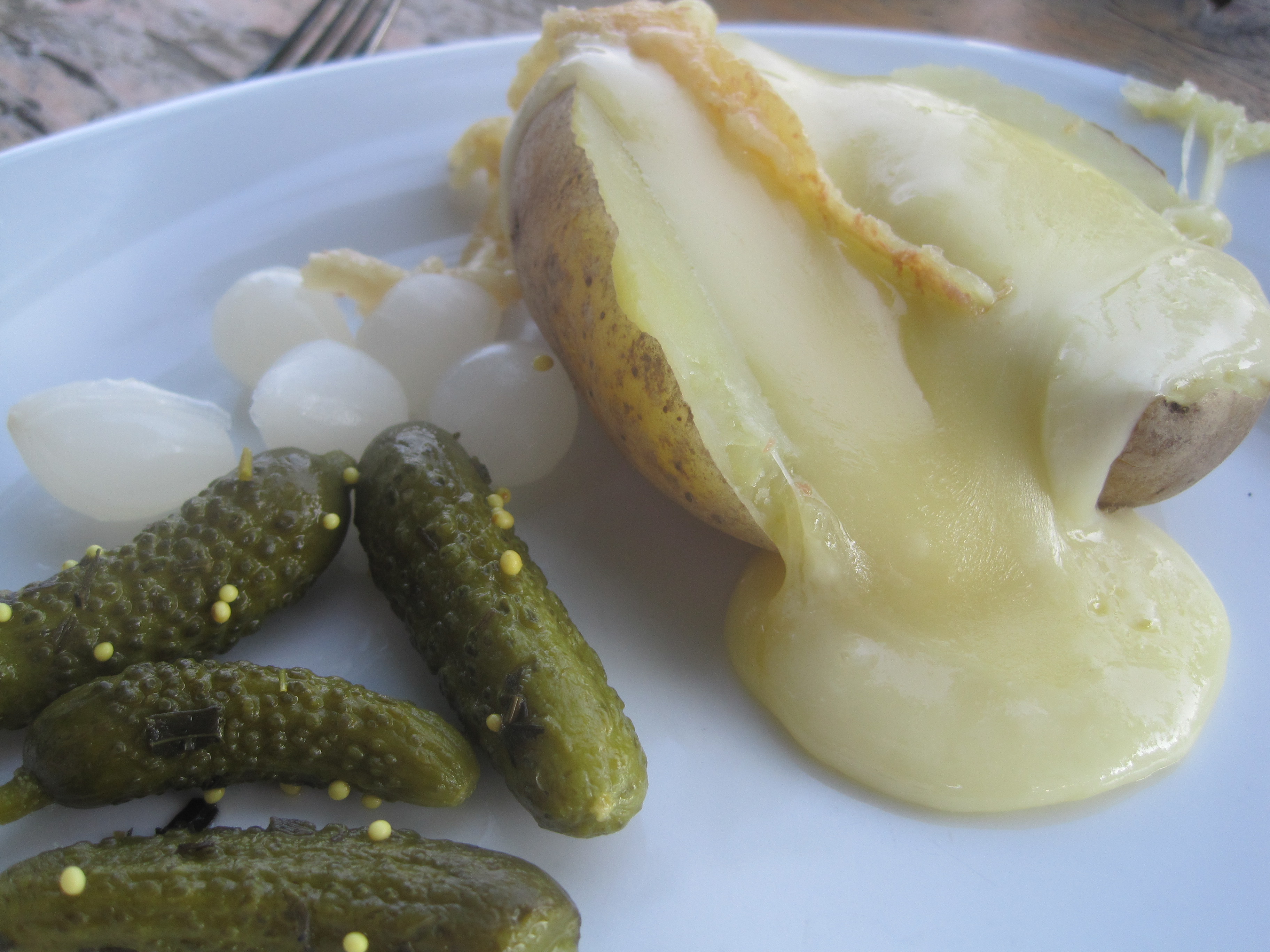 Raclette has more than one definition. Raclette is a Swiss cheese dish, a cultural land mark, the name of a cheese, a table top appliance, a dining experience, a great time!
Raclette is very popular in Europe, especially in the Swiss Alps and other ski regions. And that’s where it’s said Raclette came from.
Back in the days, Swiss shepherds from the French-speaking Valais region needed to bring food up to the Alps that was relative cheap and wouldn’t spoil easily in the hot summer month. So they brought cheese and potatoes. While the potatoes roasted in the fire, a big piece of cheese was put close to the fire. Once it started melting the cheese was taken away and scraped of the cheese onto the baked potatoes. This was not only filling and nourishing but also delicious.
Raclette is a semi-hard cheese made on both sides of the French and Swiss Alps. Valais Raclette or Fromage a Raclette, as they are traditionally called, are made using ancestral methods with unpasteurised milk of cows grazing on the alpine meadows. The name Raclette comes from the French word ‘racler’, which means ‘to scrape’. The cheese has got a thin, brownish-orange coloured rind and a pale yellow pate with a few and scattered open holes. It is has a very distinctive pleasant, aromatic smell with a creamy texture, similar to Gruyere cheeses, which does not separate even when melted. The flavour can vary from nutty, slightly acidic to milky.

While Switzerland supplies 80% of Raclettes, French Raclettes are slightly softer with a smooth and creamy flavour. Raclette is also the name of a Swiss dish where the cheese is melted in front of a fire or a special machine and the melted parts are scraped onto diner’s plates. It is then served with small potatoes, gherkins, pickled onions and air-dried meat called Viande des Grisons. Raclette comes in round and square shapes and can be served with Vin de Savoie.

Today, few houses have an open fireplace, so to simulate the process we now have Raclette Melter that hold a block or half wheel of cheese under a heating element. Once melted, the cheese is being scraped off onto the prepared potatoes.
Another variety is a Raclette Grill, which allows melting individual portions of cheese and offers a grill top to serve grilled vegetables, meat, chicken, or fish with the cheese. Many of these models come with a reversible grill top that can be used to make crepes or pancakes. And yet another variety can be converted into a mini pizza oven.

This simple raclette recipe should be the first you try on your raclette grill or raclette melter. Serves 4

Wash potatoes and, with skins on, boil in a pot filled with salted water for about 20 min.  Test with a knife if the potatoes are done. Keep warm until ready to use in an insulated potato basket. In the meantime remove the rind of the cheese and cut into 1/16″ thick slices using a adjustable wire slicer. Arrange gherkins, onions, and Buendnerfleisch on a platter and set aside until required. Turn raclette on to begin to heat up (allow for at least 5 minutes before using). For raclette grills: Each guest takes a slice of cheese, places it in their pan and slides it under the raclette grill to melt. It takes approximately 2 minutes to melt to a creamy consistency and 3 minutes for a more crispier top. In the meantime take a potato, place onto your plate and cut it into a few pieces, remove the pan from under the grill once it’s reached its preferred consistency and hold the pan onto its side to scrape the cheese out, using your wooden spatula. For raclette melter, each guest prepares potatoes and side dishes on their plates. When the cheese starts melting on the wheel, scrape the cheese onto the plate. Season to taste with freshly ground pepper and paprika. Pair Grand Cru Raclette with Pinot Grigio, Fendant, a Swiss white wine, or a light, fruity red wine, such as Beaujolais.

Let Shisler’s Cheese House help you make your next memorable melt experience with our supply of Raclette Cheese!