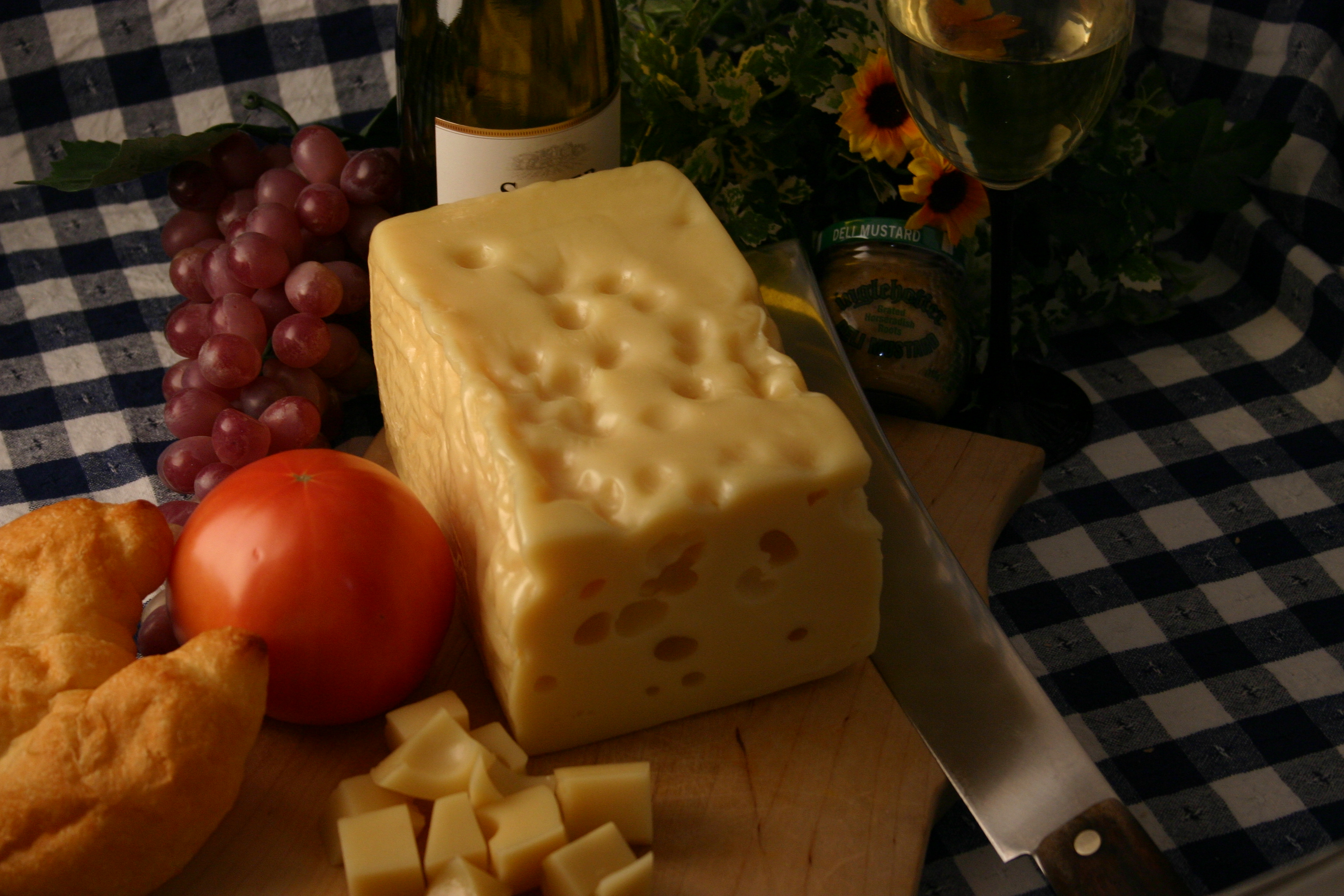 Of all of the cheeses we provide, our locally made Swiss is by far the most popular.  As of this writing, we sell an average of 2,000 pounds per week, and triple that during the holiday season.  Here is a story about the early history of what we call “Swiss Cheese.”  For additional information on locally Made Swiss Cheese, check out our earlier post entitled Swiss Cheese or “Swiss” Cheese? Or Making Cheese the Amish Way.

Swiss cheese is the favourite of many due to its rich, delicious, mouth watering taste. Every single slice of this cheese is visually stimulating and come with large holes. These unique holes are created by adding gram positive bacteria to the starter culture. The carbon dioxide bubbles created by bacteria give holes to Swiss cheese. The bacteria are also responsible for the sweet and nutty taste of this cheese.

Walk into any of the cheese stores in Australia, United States, New Zealand or Canada and ask for Swiss cheese and you will get exactly that. You cannot guarantee this anywhere else in the world. For example, if you wish to purchase this mild tasting cheese with holes in Europe, you must ask for Emmental cheese. Swiss just refers to the origin and is not its name.

Emmental or Swiss cheese was first manufactured in West Central region of Switzerland. This region is also known as the Emmental area. This area is ideal for pastures with its large rolling fields. Emmental’s pastures were used by local farmers for thousands of years for dairy cattle grazing. A part of the milk obtained from the cows was used to make cheese.

Very soon, cheese became synonymous with Emmental. This cheese’s incredible taste and unique appearance was popularized by a writer through his series of novels on the Emmental dairy and cheese industry.

According to history, it was as early as 1300 that the Swiss cheese started to be produced in Emmental. It was however only in the 1800s that the first ever cheese dairies came into existence here. This in turn made the cheese very popular even with people who did not live in this region.

Gradually many dairies were developed in Emmental which resulted in the production of cheese in large quantities. Swiss cheese was then marketed to other areas and eventually all over the world.

Today, Swiss cheese is available throughout the world but visit Emmental and taste the cheese and you cannot miss the extra local flavour. Dairy farmers in Emmental are extremely choosy about what they feed their cows as they realize that the diet affects the final flavour of the cheese.

Cows, when they can graze in summers, live only on herbs, especially natural herbs. They are never fed silage. No farmer in Emmental has more than twenty cows, which allow them to care for them in such a manner that they produce the best quality milk.

In addition to our locally made Swiss Cheese, we also have our local Emmentaler, made by the original old world recipe. The Art of Cheesemaking

Here is a video demonstrating the difference in the Amish Cheesemaking process.  Video footage courtesy of one of our principal local cheese suppliers, Guggisberg Cheese. Here are links to the cheeses described in this video:
Swiss Cheese

And you can find over 60 other cheeses, including several others produced by Guggisberg Cheese at: https://cheesehouse.com/cheese.aspx We all know what Swiss cheese is.  An image probably comes to mind of the neatly pre-sliced cheese we buy in small packs from the grocery store characterized by its myriad of holes.  It has a mild taste and the slices are good for making sandwiches.  But do we know where it came from?  Most non-cheese connoisseurs do not.

The concoction riddled with holes that we know as Swiss cheese was inspired by specific types of cheese that originated in…you guessed it…Switzerland.  However, the cheese you buy in the grocery store is very different from the real, premium Swiss cheese, which is still available today, and doesn’t cost an arm and a leg unless you are a purist and insist that the only real Swiss cheese is imported from Switzerland.

The “Swiss” cheese that was the original inspiration for what we now call Swiss cheese is called Emmental or Emmentaler.  Emmentaler is so named because the particular process by which the cheese is made originated in the Emme Valley, in the Canton of Bern, Switzerland.  The process involves certain natural bacteria consuming the lactic acid in the cheese and releasing carbon dioxide gas, which slowly forms the bubbles that create the perfectly round holes that characterize Swiss cheese.  Cheese experts often refer to these holes as “eyes.”

This process that was born in the Emme Valley has inspired a large number of the cheeses we enjoy today.  Emmentaler is now produced in other European countries like France, Finland and Germany as well as it’s native Switzerland.  Jarlsberg from Norway,  and Leerdammer and Maasdam from The Netherlands are all similar variations of the original “Swiss Cheese.”  But the problem we have in North America is that importing food can be an expensive process, from transporting it under the proper conditions to the government inspection standards.  That all adds to the price of the cheese we enjoy, making it a luxury product.  But those on a budget can still enjoy delectable Swiss cheese.

The problem with the mass produced Swiss cheese we find in the grocery store is that the production process has lost its integrity in the name of high volume output.  This is often debated, but generally the larger the eyes, the more pronounced the flavor of the cheese.  The reason for this is that the conditions that provide the ideal flavor, longer aging at higher temperatures, are also the ideal conditions for the enzymes and bacteria to create larger eyes.  This creates two problems with mass producers that are focused on turning a profit.  The longer aging process slows production, and the larger eyes make it difficult to neatly slice the cheese on mechanical slicers, because the cheese comes apart.  Both of these factors cost time and money, so Swiss cheese manufactured in North America is often less aged and flavorful than imported varieties.

So how can we enjoy good Swiss cheese without spending an arm and a leg?  We buy it from a “cheese artist”, rather than a “cheese business.”  During the wave of European immigration to North America in the late 19th and early 20th centuries, many immigrants from the canton of Bern, Switzerland, where the original Emmentaler was produced, settled in Northeastern Ohio in what is now Holmes County.  Holmes County, OH is now also the largest Amish settlement in the world.  The Swiss immigrants brought their cheese making traditions with them, and although production has been aided by some automation, the original process is still strictly adhered to.  But the process is not the only element necessary to successfully produce incredible Swiss cheese.  It is essential that the milk used in making the cheese comes from specific types of cows that graze in specific grasses.  All of those elements are present in Holmes County Ohio, and the milk is provided by local Amish farmers who do not give their cows hormones or antibiotics or add preservatives to the milk.  The result is a Swiss cheese that tastes as good, if not better than the original Emmentaler that is imported from Switzerland, at approximately 1/3 the price.

So if you are a chef who likes to include fine cheeses in your recipes, you entertain frequently, or are simply a cheese enthusiast with a taste for fine Swiss cheese, you don’t have to take out a second mortgage to buy imported cheese or sacrifice quality for affordability.  All you have to do stop into one of the local cheese stores in Northeastern Ohio, or if that’s not an option you can order online from www.cheeshouse.com/ohio-swiss-cheese.  They ship to all 50 states and Canada.