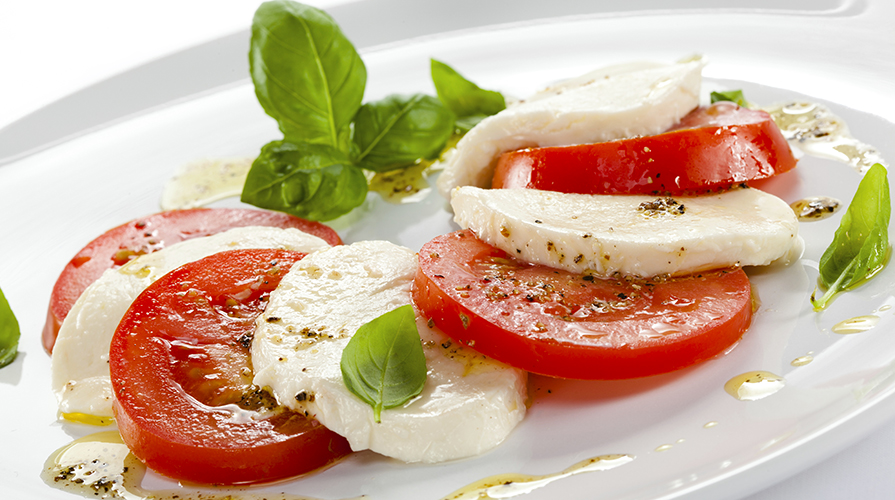 No one can quite say when or where the most famously simple of all salads — the insalata caprese — first appeared on the scene, or the exact origin of when it was named after that beautiful sun-soaked isle of Capri, part of very historic Campania region. But one thing we do know is that it is absolutely one of the most enduring of all Italian antipasti and so evocative of those heady days of fun, vino and romance along the Mediterranean coast.  (Speaking of fabulous Italian things, be sure to check out the recent post Studio of Style did on Campari.)  Of course, the famed tricolor look of the dish which, like the equally famed Margherita pizza of Napoli, depict the colors of the Italian flag. But let’s dig a little bit deeper into history, okay? (We know how you regular readers of Studio of Style just love a little bit more of everything, right?)  First of all, so much of the world associates Italian cuisine with that wonderful deep red tomato sauce found on many dishes — but wait! The word “pomodoro” from the words “pomo d’oro” or “golden apple” doesn’t quite match up with the color red, now does it? That’s because the first tomatoes brought to Europe from the New World (i.e. The Americas) were actually more likely to have been yellow than red! More on that in a moment.  But some say that “pomo d’oro” might also be a mistranslation of the phrase “pomo di moro” or “fruit of the Moors” who had introduced so many exotic foods to Italy.  You see, it was Italian physician and botanist Pietro Andrea Mattioli who wrote in 1544 that a new type of eggplant had been brought to Italy which was blood red or golden in color that could be eaten like an eggplant — and 10 years later Mattioli used the words “pomo d’oro” in print.  The yellow variety of the tomato definitely made landfall in Europe sometime after 1521 when Spanish conquistador Hernán Cortés captured the Aztec capital of Tenochtítlan in Mexico — though Christopher Columbus of Genoa (who was also working on behalf of the Spanish monarchy) might very well have brought some back around 1493! And did you know that the earliest known Italian cookbook with tomato recipes was published in Naples (naturally!) around 1692 — most likely the recipes were translated from Spanish sources. Thus, by a slight twist of history the famed marinara sauces became red and not yellow (but the name “golden apple” still stuck!). But the bigger question is: who put together that amazing combination of basil, mozzarella di bufala, tomatoes and olive oil — crowned with a light sprinkling of salt and black pepper — a combo that epicureans have been raving about ever since? To enjoy this antipasto to the fullest, try to find the freshest handmade mozzarella, the ripest seasonal tomatoes, absolutely fresh basil, the best extra virgin olive oil and high quality salt and freshly ground black pepper (and please, novinegar of any kind!!).  Said perhaps one of the most famous Italians of all history, Leonardo da Vinci: “Simplicity is the ultimate sophistication.” And how right he was…and still is! The simple yet profound pleasures found in insalata caprese transcend time itself! And in the words of so many Italians throughout the ages: Mangia bene, vivi felice!

Once again, you can see the colors of the italian flag in this dish. Insalata Caprese is one of my all time favorite salads.  I like to serve it over a bed of fresh spinach.  Refreshing and light!

The word mozzarella comes from the italian verb “mozzare” which means to cut.  Mozzarella di bufala is made from the milk of the domestic water buffalo, a bovine which has it origins in Asia but is now found in southern Europe, South America, Northern Africa and India among others.  Mozzarella di bufala is a bit saltier and softer than regular cow’s milk mozzarella.  The best quality is considered by many Mozzarella di Bufala di Campania made in the geographical areas of Lazio (near Rome) and Campania (Naples, Salerno, Paestum, Pompeii, including Capri) Regions which became protected by the European Union under Denominazione di Origine Controllata (DOC like in wines) in the 1990’s. It literally melts in your mouth!  In short, mozzarella is made by heating the milk (to separate the whey form the curds), resting, spinning and pulling the cheese curds to shape into balls. The cheese maker will knead the curds like bread by hand, pull-out and cut the mozzarella balls once the cheese curds have reached the desired consistency. This is a semisoft cheese and has a high moisture content. That is why it is sold in specialty food shops in brine and vacuum sealed.  On the other hand, good quality mozzarella di bufala is made in many other countries in Europe and the Americas.

Insalata Caprese (salad made in the style of Capri) can also be called Tricolore Salad which also includes avocado.  If you want to splurge (it is more expensive than regular mozzarella) and the best flavor and quality, use mozzarella di bufala when you make homemade pizza. Use it as a topping or make Insalata Caprese Pizza.  It is amazing!

1.  Slice mozzarella and tomatoes.  In a plate, alternate placing one slice of tomato over each slice of mozzarella.

2.  In a small bowl, place the chopped basil with olive oil, salt and pepper and stir with a spoon.

3.  Spoon mixture over mozzarella and tomatoes. Drizzle with balsamic vinegar and serve.

4. Enjoy this delicious and healthy dish!

Make sure to stop by Shisler’s Cheese House and let us help you create this simply, beautiful and delicious work of culinary art with our supply of fresh Mozzarella Cheese!