Home/Cheeses/The Limburger Legacy: A Cheese That Has No Equal

The Limburger Legacy: A Cheese That Has No Equal 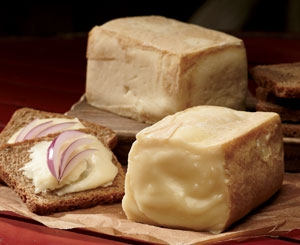 “Limburger—Don’t Eat It with Your Nose.” So reads the sign above the bar at Baumgartner’s Cheese Store and Tavern in Monroe, Wisconsin: the only city in America where Limburger cheese is still made.

Limburger has been the butt of jokes for nearly a century, though to be honest, it smells more like feet. Past celebrities from Mark Twain to Charlie Chaplin have used it as comedic fodder, and on a visit to Baumgartner’s, comedian Larry the Cable Guy spat out his sample, declaring that it tasted like a dead possum. But Andrew Zimmern, host of Travel Channel’s “Bizarre Foods,” loves the stuff.

Truth be told, there are far more challenging food products on the planet…like Iceland’s hákarl or China’s “century egg.” Even in the cheese world, Limburger pales in comparison to pillars of pungency like Époisses or Stinking Bishop…but the more famous Limburger’s reputation lives on.

History of Limburger: Who Came Up With This Stuff?

As European food products go, Limburger hasn’t been around all that long. It was first made in the 19th century by Trappist monks near Liège in the Duchy of Limburg (a territory now divided between Belgium, the Netherlands and Germany). Before you joke about the stinky cheese helping the monks maintain their cloistered lifestyle, bear in mind that the Trappists are also known for making some of the very finest beers in the world. Today, most of the Limburger in Europe is made in Germany.

Limburger was first made in the U.S. in 1867 by Swiss immigrants in Green County, Wisconsin. In this epicenter of Swiss cheesemaking, Limburger even outpaced Swiss in annual production by the 1920s in order to supply the German-speaking populations of places like New York and Cincinnati, where a Limburger sandwich was a favorite workingman’s lunch: cheap and typically washed down with a glass of beer. Apparently it was nearly unthinkable to eat Limburger without the accompanying brew, because Prohibition so hurt American sales of Limburger that production either ceased or sharply curtailed in most American cheese factories.

Farm to Table in Monroe

Today the only American producer of Limburger is Chalet Cheese Cooperative of Monroe, Wisconsin: the seat of Green County. Of the 56 Master Cheesemakers in Wisconsin, only Chalet’s Myron Olson is certified to make Limburger.

Founded in 1885 by five dairy farmers, Chalet Cheese Cooperative today is owned and operated by 21 member farms. Olson, who started working there at age 17, has managed the plant for more than 20 years. Because he uses only milk from the Cooperative’s member farms (comprising 70% Holstein and 30% Brown Swiss cows), he knows exactly where the milk is coming from and the qualities it will contribute to the final product. He also believes the limestone-filtered water of south-central Wisconsin helps make the best-quality cheese to be found anywhere in the world.

Olson doesn’t just make Limburger, either; certified in other styles, he has won numerous state and national awards for Swiss, Baby Swiss and smoked versions of both. He also makes the very mellow Brick cheese as well as an award-winning German-Style Brick: a close cousin to Limburger, with the same bacterial smear used for ripening it.

Limburger is one of a number of smear-ripened, washed-rind cheeses. Washed-rind cheeses are cured in a saltwater brine which may or may not include things like beer, wine, and spirits. Periodically washing the cheese with this solution keeps the surface moist and hospitable to bacteria like Brevibacterium linens, which happens to be the very same bacterium responsible for human body odor—specifically foot odor. So if someone tells you Limburger smells like sweaty gym socks, they are technically correct.

Of course, the food world is full of examples of beneficial bacteria. Microorganisms like Lactobacillus bulgaricus and Streptococcus thermophilus give yogurt its distinctive tang and break down lactose to make it easier to digest. In the case of Limburger, a healthy smear of B. linens helps the maturing process and prevents the growth of undesirable molds. Other smear-ripened cheeses include the French Port Salut and Munster (not the mild, red-rind Muenster we’re familiar with, but a much funkier variety). The bacterial culture used at Chalet was first cultivated in 1911.

Limburger as we know it was nearly eradicated in the U.S., ironically by the company that built the Chalet plant and was founded by the man who “cleaned up” cheese in America.

J.L. Kraft invented processed cheese through a patented pasteurization process, which allowed his cheese to be shipped long distances. Kraft’s Mohawk Valley Limburger Spread was a nationwide hit, and in 1947 his company built what they considered the most cutting-edge Limburger plant in the world (which Chalet now uses). In the name of progress and sanitation the Kraft folks replaced the plant’s old pine curing boards with new ones. The cheese failed. Luckily, they had saved the old boards—which have been in use ever since—and the century-old colony of B. linens continues to work its bacterial magic.

The Three Stages of Limburger

“That old bac magic” takes awhile, and despite the overwhelming aroma encountered at Chalet during the cheesemaking process, fresh Limburger is not all that intimidating. In fact, it’s even downright mild in its infancy, and only develops its nasty temperament over time…with a little help from temperature. Limburger is dated to expire in six months; using the “Best if used by” date on the package as your guide, you can age your own Limburger in the fridge at home to suit your personal taste. We can break down the metamorphosis of Limburger into three stages:

Stage 1 (Beginner): If you like things on the mild side, eat it fresh out of the fridge, and as soon as possible after you buy it. When the cheese is only a few weeks old, it’s mild and crumbly—a bit like feta—with a bit of a yeasty smell. Like all washed-rind cheeses, Limburger ripens from the outside in…and since the rind contains most of the funk, cut it off before serving.

Stage 2 (Intermediate): Two to three months before expiration, Limburger is rich and creamy, and just starting to stink…like Brie with an attitude. Let it come to room temperature before serving for maximum flavor. The rind is edible, but does add strength. You can wash it and dry it if you wish to remove some of the odor.

Stage 3 (Hardcore): At four or more months, you’ve got weapons-grade Limburger—soft, almost runny, and in full-on sweaty sock mode. Remember that six-month expiration date? Diehards see that as a starting point, and even take it out of the fridge periodically to speed up the process. Just remember: it smells far worse than it tastes. Even at this stage, the flavor is not as sharp as aged Cheddar or as pungent as blue cheese. It’s very robust and rich. As they say at Baumgartner’s, “don’t eat it with your nose”; just pop it in your mouth and enjoy.

Because its unique aroma tends to overpower most foods, Limburger is not really considered a “recipe” cheese…although the Wisconsin Milk Marketing Board and a cult of fans will beg to differ.

The classic way to serve Limburger is on rye bread with sliced red onion and brown horseradish mustard or sweet-hot mustard. A lot of folks love it with strawberry jam, either as the sole condiment (especially at Stage 2) or in addition to mustard.

Baumgartner’s serves the full-strength Limburger on their famous sandwich (as above, no jam), or for true believers they’ll add a couple of thick slabs of locally made braunschweiger (liver sausage). And they always serve it with a breath mint, though that’s somewhat like the proverbial Band-Aid on a bullet wound.

Unless you have pretty adventurous friends, you’re probably not serving Limburger at a wine tasting party. That doesn’t mean it can’t be done, but Limburger is a workingman’s cheese; it goes best with beer, preferably bock (a hearty, often dark, variety). At Baumgartner’s, locals get the full Monroe terroir by enjoying Limburger with Huber Bock from the Minhas Brewery right down the street. A porter or stout would certainly do the trick, too—think dark and flavorful.

The bottom line is: if you’re a real cheese lover or someone who craves a little adventure, you owe it to yourself to put Limburger on your food bucket list. Stop by Shisler’s Cheese House and make this bucket list item a reality and pick up your own share of Limburger Cheese!