Home/Cheeses/Swiss Cheese: Everything You Need to Know

Swiss Cheese: Everything You Need to Know 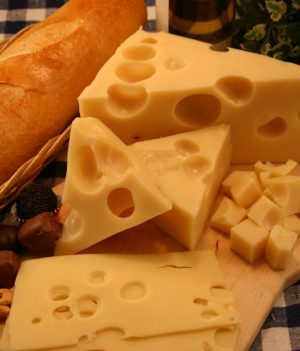 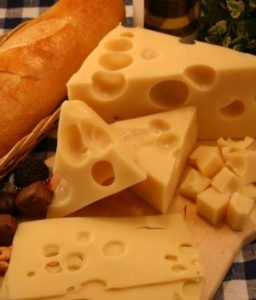 What is Swiss Cheese?

A holey, semi-hard cheese with a creamy color.

How does it taste?

It has a nutty, slightly piquant flavor whilst simultaneously being somewhat creamy.

How is Swiss Cheese made?

The process of making Swiss cheese involves natural bacteria consuming the lactic acid in the cheese. This releases carbon dioxide gas, which forms bubbles that become the holes in the cheese. These are often referred to as “eyes”. Our Amish swiss cheese, made in Northeastern Ohio, is especially flavorful because of the longer aging process that it undergoes, at a higher temperature than younger cheeses. This produces larger eyes, which is sometimes seen as an indicator for better flavor.

The milk used in our Swiss cheese does not have preservatives added and is always from cows that have not been given hormones or antibiotics.

We also offer Baby Swiss, which substitutes water for the milk’s whey to slow the bacterial action. This creates smaller holes and a milder flavor. Lacy Swiss is another variety of Swiss cheese, made with low-fat milk. We even offer smoked Swiss cheese.

Swiss cheese is delicious in a sandwich or served cut into cubes alongside salads and hams. It works well with most meats and is particularly good with a beef burger.

Use it as fondue or mix it into dips for a fun dinner party meal or appetizer.

For breakfast, eat a slice of it with ham in a croissant. You could even have fruit with it, as it has a nutty, caramel quality that complements apples and grapes well. It’s also very good with pickled fruits or vegetables. Consider adding them to your next cheeseboard for flavor and bite.

You could add an extra punch of flavor to your favorite mac and cheese by grating in some Swiss cheese. It is equally good with other pasta dishes, such as a creamy spaghetti or a linguine with vegetables. Use it with your breadcrumbs when making schnitzel for an extra crispy, cheesy bite.

What should I drink it with?

It goes well with Belgian ales or other creamy beers such as a pale ale. A light red wine such as Pinot Noir or Zinfandel won’t overpower the light flavor of the cheese but will bring out its sweetness. You may also find that crisp white wines such as Rieslings make a good companion for this cheese.

For a non-alcoholic option, an apple cider would be a good option as the apple flavors will offer a honey quality alongside the cheese.

How do you like to eat Swiss Cheese? Let us know in the comments!