So, You Think You Know Cheese?

Cheese is one of the most hallowed and beloved foods on the planet, and is seemingly consumed on a daily or near-daily basis by a majority of the world’s populations. Cheese has been around since the beginning of time, it seems, and has transpired from a staple food to a culinary masterpiece. 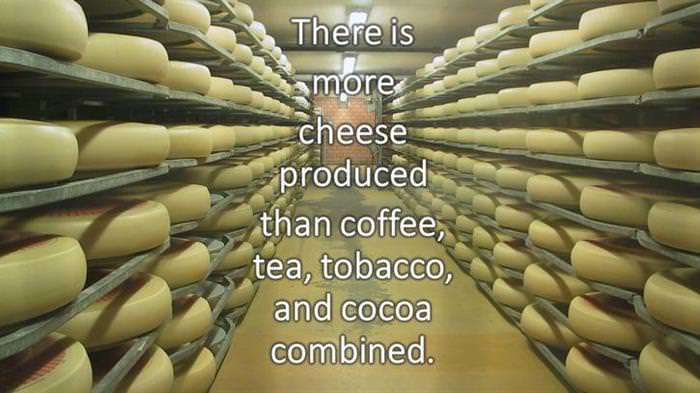 Here are a list of cheese facts that may just add to the mystery, that is cheese and its curious cases…

Albeit, there is not much specific information concerning the history and origins of cheese, it is believed that cheese dates back to approximately 6,000 BCE, according to archaeologists. Experts have determined that, based on their findings, during that era, cheese was produced from the milk of cows and goats across Mesopotamia.

Studies have shown the mozzarella cheese has the highest rate of consumption of any other cheese on the planet. Moreover, there are over 2,000 different cheeses that are produced, circulated and consumed around the world.

Who are the largest consumers of cheese? Nope, not Italy or France, but Greece. On average, a person from Greece consumes about 60 lbs of cheese, annually, much of it coming in the form of Feta.

Cheese is the largest produced staple around the world. Its production is more than the production of coffee, tea, tobacco and cocoa beans, combined!

The very first cheese-making plan was born in Switzerland in 1815. The first mass production didn’t begin until 36 years later in the United States.

Cheese is an excellent source of protein, calcium and phosphorus, when eaten in moderation of course. Cheese gets a bad name mainly from its higher content of saturated fats.

Yes, the United States acknowledges the greatness of cheese. How so? They have dedicated the month of June to National Dairy Month while the last week of June is National Cheese Week.

Twenty million metric tons of cheese is produce on a global level annually and production will continue to increase every year.

On average, about 10 lbs of milk is needed to make just one pound of cheese. That’s a 10:1 ratio and seems like a ton of work for only one pound of cheese, but if it were not for cheese-making, a tremendous amount of milk would be wasted every year.

Cheese has a very long shelf life, and in some cases, cheese is exposed to mold which allows them to age properly. These cheeses include: Bleu Cheese, Gorgonzola and Brie, among others.

During the time of the Roman Empire, many larger homes belonging to Roman residents had separate kitchens that were designated for cheese-making. These kitchens were called “careale”.

Lastly, there are a number of cheeses that promote dental health as they prevent tooth decay. Cheese like mozzarella, cheddar, Swiss and American increases the amount of saliva flow which leads to elimination of sugar and acids from the mouth that would aid in decay.