What are Cheese Curds? Cheese curds are eaten as standalone foods by some. Small, solid chunks of cheese are produced as a part of the cheese making process. Cheese curds are separated from natural whey and pressed into molds to make cheese. Different types of cheeses are produced by treating curds in different ways. These curds can also be eaten straight. In the American Midwest, cheese curds are very popular, especially curds obtained during the process of making cheddar cheese.

The first step in making cheese is to curdle the milk using a combination of bacterial cultures, rennet and acid. You get cheese curds separated from whey as the milk solids coagulates during the curdling process.

Curds are then separated from the whey. To make the process of separation easier, the curds are cut into small pieces. Cheese curds are then packed into molds after adding salt which eventually turns into cheese. Rich, mature cheese is created by aging the finished cheese.

Some find cheese curds bizarre as they have a characteristic squeak when eaten. Eat them days after they are made and you will find them squeaking against your teeth.  Squeak in them is due to the moist whey. As the cheese curds get older, the whey or moisture in them dry up and the squeakiness disappears.

Cheese curds are used in many different ways. Apart from eating them as it is, people deep fry them, serve them on appetizer platters or sprinkle them on top of foods. One of the reasons why cheese curds are not available in areas where there are no cheese manufacturers is the fact that they go bad very quickly. To enjoy optimum texture, flavor and squeak, cheese curds must be eaten within 12 hours.

You can store cheese curds by freezing them for up to six months. Even though they may crumble when thawed and may not be as fresh, they still taste great. Fried cheese curd is made using frozen curds.

There are many different varieties of cheese manufactured around the world including the soft cottage cheese and the hard cheeses like Pecorino and Parmesan. Interestingly, all of them are made from the squeaky, humble cheese curds. Today you can also find a variety of different cheese curd flavors. Some of the popular flavors include Roasted Garlic, Chive, Hot Pepper, and spicy Buffalo Wing. These curds make for a friendly snack and are used by some to make poutine (Cheese curds melted over french fries with gravy) or to put on salads.

How do you like to enjoy your cheese curds? 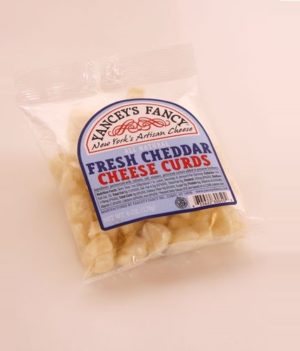 Cheese Curds: Everything You Need to Know Spice Up Your Life with our Red-Hot Pepper Cheeses!