Description of Walnut Creek Hot Pickled GarlicWalnut Creek Hot Pickled Garlic is an Amish classic. From the heart of Ohio’s Amish Country Walnut Creek.HistoryFrom Walnut Creek Foods President, Mark Coblentz…”It all started with a pickup truck and a slide-in refrigerated box in April 1977. I was 21years old with more spunk than sense. A cousin told me about an opportunity where a local fellow had a cheese route for sale. I struck a deal that put me in business. There was a little problem, though: The previous route owner neglected to tell me that he had quit the route a month before, and I happened to be the first guy who came along. The business really wasn’t much more than that pickup truck, an assortment of 20 local products and a list of about 60 potential customers.

Early on a Tuesday morning I filled my truck and headed for Northeastern Ohio, peddling cheese and Trail Bologna to retail stores. Since I was using the previous owner’s invoices, I was hoping I wouldn’t have to pronounce one of the items listed—cheddar cheese—because I didn’t know if it was pronounced chead-er(like “header”) orcheed-er(like “reader”). My cheese experience at that time was limited to having tasted four varieties: Swiss, Baby Swiss, Longhorn and occasionally a Casino Brick.

Another customer took me under wing and helped me gain a number of new accounts. Because of these new clients’ requests, I soon realized that just 20 varieties of cheese weren’t meeting my customers’ needs. I began checking out additional products. I figured since I was already delivering at a store, I might as well maximize my marketing potential. Even though I didn’t have the benefit of education—or even experience—behind me, I did have a significant edge. That edge was that my parents had raised me with Christian values. My parents are conservative Amish Mennonite, and they had taught me to go the extra mile. They also taught me the importance of honesty.

Honesty and integrity have always been hallmarks of our company. Early on, one of my new customers received a three-cent credit from me. It convinced her that we were a company she wanted to do business with. She became a lifelong fan of Walnut Creek Cheese and a friend of the family. My first warehouse was a couple of refrigerated truck beds and a shed on my dad’s farm. In 1984, when more space became necessary, we built our first building in Walnut Creek, Ohio. We attached a retail store to it, primarily so I could justify having personnel to answer the phone for wholesale orders and pick-ups. Although the retail store began as an afterthought, it was the beginning of us becoming a team. In an interesting development, the retail exposure and knowledge of products needed to make retail successful were used to better serve our wholesale customers as well.

Our team further maximized potential by opening our second retail store, this one in Berlin, in 1996—and acquiring Uncle Mike’s Beef Jerky in 1998. The tantalizing taste of Uncle Mike’s Beef Jerky made it a mouth-watering complement to our line of manufactured foods.
Acquisitions played a large part in the early growth of our company because our growth was directly linked to the friendliness we extended to our competitors. By not soliciting their customers, we treated them as we would want to be treated. Also, if any of our competitors were going to be short a product for their routes, they could count on us to supply it to them at a price that was just above our cost. I believe this was a factor in the management of these companies talking to us when they were ready to sell their businesses.  Because of these acquisitions we moved our wholesale operations to Millersburg for a period of three years. Our vision was to build a new warehouse in Walnut Creek. This dream was fulfilled in 1997 when we constructed our new warehouse facility. We designed our warehouse so that we could wrap our retail outlet around it when we outgrew our existing retail locations in Walnut Creek and Berlin. This happened in 2002. We were able to use the high ceilings and mezzanines from the warehouse to display the antiques and nostalgic items that I’ve collected over the years. This created a unique shopping experience as we continued to serve our customers with our low prices and Walnut Creek quality. 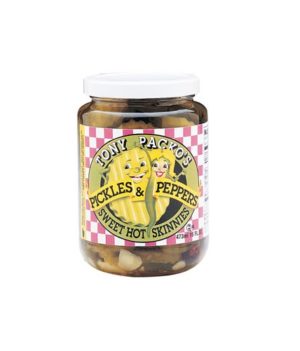