A classic pickle, but an incredible recipe! Sweet, but not too sweet, not to mention crunchy.History of Tony Packo’s The son of Hungarian immigrants, Tony Packo was a native East Toledoan. Tony was born in 1908, just a stone’s throw from Consaul and Genesee streets.  Tony Packo started out as a factory worker. That all changed when, in 1932, he and his wife got a $100 loan from relatives. No small feat, mind you, for this was during the hardest of hard times, the first years of the Great Depression. That same year he opened a sandwich and ice cream shop just around the corner from the place he was born. Tony had learned the restaurant business working for his older brother John, who owned a place across Consaul Street in what is now Tony Packo’s parking lot. There was no beer at Packo’s that first year. Prohibition would not be lifted until 1933.

Because Tony was Hungarian-American and lived in a Hungarian neighborhood, Tony’s creation was called the Hungarian hot dog.  Until Toledo-born Tony invented it, there was no such thing as a Hungarian hot dog, say those who know the Old Country’s food. Packo’s food was an instant hit in the neighborhood. Within months of opening, Tony and Rose knocked out a wall and expanded their first shop, in what is now called the Consaul Tavern. By 1935, success had taken them to the point where they could buy a building of their own. They purchased the wedge-shaped establishment at Front and Consaul. The building houses part of today’s Tony Packo’s, but with a few more additions. The restaurant is still run by the Packo family.

The words that came out of Jamie Farr’s mouth on Feb. 24, 1976 would put Tony Packo’s in the spotlight. Farr, a native Toledoan himself, appeared in the television show “M*A*S*H,” playing Corporal Max Klinger, a crazy medical corpsman who was also from Toledo. In the episode that made Packo’s future, a man playing a television newsman talked to Klinger about his hometown. Farr wrote a little local color into his reply. The lines read, “If you’re ever in Toledo, Ohio, on the Hungarian side of town, Tony Packo’s got the greatest Hungarian hot dogs. Thirty-five cents…” Thus a new epoch began. The name appealed to the scriptwriters, who wrote Packo’s into five subsequent episodes. In one show, the mobile hospital unit asked Packo’s to send sausage casings to be used in a blood-filtering machine. Packo’s was also mentioned in the two-and-a-half-hour final episode in 1983.

THE MOST POPULAR BUNS IN THE MIDWEST

The Farr coup was actually the second time that good fortune, in the form of a celebrity, graced Tony Packo’s. In June 1972, Burt Reynolds was playing “The Rainmaker” at a local auditorium, and Nancy (Tony Sr.’s daughter) got a notion to get him into her restaurant. “I thought, well, he’s got to eat somewhere.” Nancy wrote a letter and took it to Reynold’s hotel.
About two nights later he showed up. Reynolds was the first big name to eat at Packo’s and sign a hot dog bun. Nancy wanted him to write his name on something to commemorate his visit. It occurred to Reynolds to put his pen to Packo’s breadstuff. This precedent was followed by scores of celebrities, including presidential candidates, whose autographed hot dog buns now are enshrined on Packo’s walls. Thus the tradition of “bun signing” began, and has continued to this day. A wonderful addition to your cabinet, check out our delicious artisan pickles! 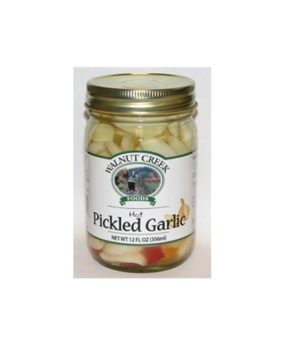 A delicious addition to any kitchen, check out our pickled garlic!