Home/Cheese/What is the Perfect Cheese For Pizza?

What is the Perfect Cheese For Pizza?

September 5th marked a day of celebration for America, and perhaps, even much of the world… because who doesn’t like pizza and cheese or both? Unknown to many is that September 5th is National Cheese Pizza Day. You know with the birth of smartphones and mobile apps came the phrase “…there’s an app for that”, well in similar light, if you love a food or, in this case, a combination of foods, a new axiom may take shape here, “…there might just be ‘National’ day for that”. A day that puts the focus of pizza and cheese, two delicious foods in and of themselves, but when together, spark a whole new revelation of culinary marvel… who would not love a day just to celebrate such a marvel? The answer should be simple… no one.

There has been an age-old question that continues to make the mind wonder and wander, that is… “Is there a perfect cheese to put on pizza?” Dr. Bryony James, a scientist whose research centers on food microstructure and food material science in New Zealand at the University of Auckland dove right in to find an answer the this question. Dr. James’ team of scientists study the building blocks of food and even experiment with structural composition of various foods that can influence its functionality. Ideally, their line of scientific research would allow them to develop a potential hypothesis for such an experiment. As the team began initial studies of the “best cheese for pizza”, they already knew that, historically, Mozzarella was highly favored and the most commonly used cheese for pizza topping.

Among countless scientific trials and experiments, the team researched cheese based on browning and blistering. These variable were designated as focuses of research as they were found to be the most looked upon features by consumers. Examining the properties, features and characteristics of cheese could potentially lead to further discoveries of the ideal cheese or in some cases, the ideal combination of cheeses to use on pizza. Other cheeses the group extended their research to was Cheddar, Colby, Emmental, Gruyere and Provolone. The actual experimentation itself was conducted by state-of-the-art technology, as opposed to human hands. As human judgment would have been idea over the work of a machine, it would have been far more time-consuming and brought the idea of a “bias” trial or opinions when bringing human emotion and interaction into the picture.

Of the properties of cheese that were measured for this experiment, smell, texture, melting properties and color were at the forefront. Researched revealed that some cheeses like Cheddar did not produce a favorable level of blistering while the likes of Gruyere did not properly brown after melting, which can be attributed to the oil content within the cheese. The results clearly indicated that although Mozzarella might be the traditional favorite cheese topper for pizzas, there might not be that “perfect” cheese or combination of cheeses, as each cheese’s characteristics and properties, when undergoing melting, might be desirable for one consumer, but desirable for another. 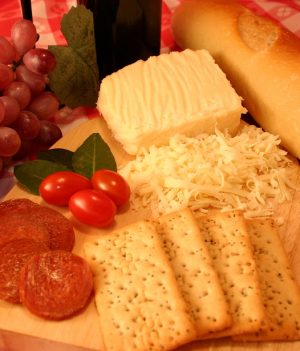