Today I want to wish all of you the happiest and most wonderful of holidays.  I know that it is likely a difficult one for many people who are without their loved ones today.  But, just remember, by skipping a gathering on this day, you are protecting the people you love.  And…HOPEFULLY…you will be able to celebrate a safe and happy Christmas together if the dust settles a bit on this current wave.

In honor of the holiday, I’d like to give you a little background on it.  No, I’m done talking about Thanksgiving.  Even if all deals are off for gathering today, all deals are on for Black Friday!  Nothing can stop the cyber shopping.  Not even 2020. (I hope I didn’t speak too soon on that. LOL)

The origins of the term “Black Friday” dates back to 1869 during, not a holiday shopping free-for-all, but a financial crisis during the gold rush.  In September of that year, two ruthless Wall Street gentlemen worked together a plan to buy up as much of America’s gold as they possibly could. This was in order to stop President Ulysses S. Grant from pursuing a dollar for gold initiative…

PBS covered this bit of history in full.  An excerpt I thought to be interestingly informative:

“When Ulysses S. Grant took office, he seemed ready to continue Andrew Johnson’s money policy. Like Johnson, Grant tried to improve the economy by reducing the supply of greenbacks, or paper dollars. He did so by using gold to buy dollars from citizens at a discount and replacing them with currency backed by gold.”

When the scoundrels’ plans came to light on the 24th of that month, the entire financial system bottomed out, leaving the whole of the country in shambles.  From peasants to the prosperous….Everyone was broke! You’ve heard the phrase, “in the red,” correct?  Well, for the next 14 months, the retail sector of the entire country was there.  In that time, bank ledgers were recorded by hand.  Red ink signified that the company was at a loss, or “in the red.”  The day after Thanksgiving in 1870, holiday shoppers flooded retail outlets for discounted gift purchases.  After that day, the book keepers put away their red pens and pulled out a pen of what colored ink?  You guessed it.  Black.

Tho it’s a super cute story, and it makes sense, this is an inaccurate portrayal of the true origin of “Black Friday.”

Another myth is that Southern plantation owners received deep discounts on purchases of slaves on the Friday after Thanksgiving.  This lore has been shut down due to the obvious racial connotations which led to boycotting of the “holiday.”

The True History of Black Friday

No, the true story of Black Friday began in 1950 on the streets of Philadelphia.  On the Saturday after Thanksgiving there is traditionally a HUGE Army-Navy football game.  Hordes of shoppers from suburbia flooded the city’s streets on the Friday between the holiday and the game.  The boys in blue of Philadelphia were forced into extremely long shifts and shoplifters took advantage of the chaos. By 1961, this chaos had made itself a tradition in Philadelphia and by the 1980’s it had become a nationwide trend.  In the earlier years, the retailers in Philadelphia had attempted to rename the “holiday” Big Friday to dissuade the negative undertones of the phrase.  But, by 1984, retailers nationwide adopted the term “Black Friday” as something positive reflected in their ledgers.  The “red to black” concept carried over to this biggest shopping day of the year where the retailers of America could finally put down their red pens. 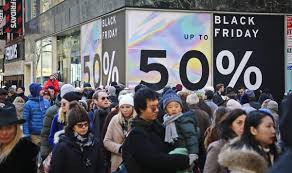 In the spirit of things, do a little holiday shopping tomorrow and beef up your pantry and those of your loved ones at Shisler’s!  The holidays were meant for snacking and we have you covered…And we would love to catch up with all of you about your Thanksgiving!

Cyber Monday is right around the corner too.

Don’t forget about our online store.  Due to COVID-19, FedEx is not guaranteeing shipping dates.  So, if you plan to send a gift box to your special someone(s), get your shopping done early this year!