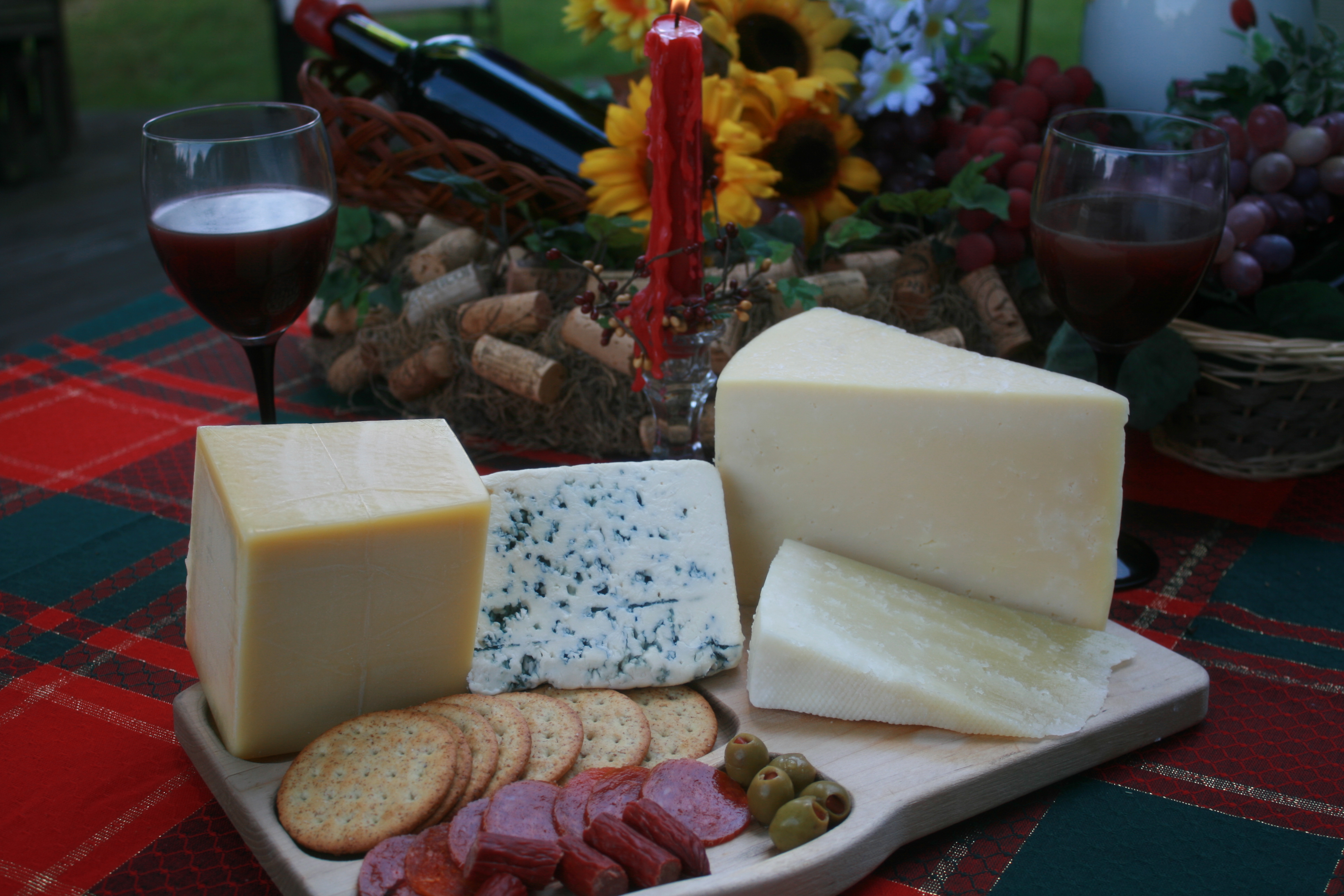 Looking to celebrate with your loved ones this holiday season?

One of our favorite additions to a Thanksgiving or Christmas party is our Red Wine Collection. We’ve chosen a great selection of cheeses, perfect for pairing with red wines. This collection will serve up to 20 guests, so it’s perfect for those celebratory moments.

Read on to find out all about the cheeses included and the wines that will make them shine! Asiago is an Italian sister of Parmesan cheese. It is aged anywhere from three months up to a year and will vary from semi-firm to firm. Its taste is similar to Parmesan, although its texture is less crystallized. It is delicious eaten with crackers and fruits, such as figs, pears, and plums.

Cabernet Sauvignon is flavor red wine choice to accompany your Asiago. The tanginess and salty, buttery qualities of the cheese will cut through the dark fruit, tannins, and spice of the wine. Alternatively, a Merlot can be an excellent choice. Blue cheeses are made with Penicillium cultures which create the blue veins this cheese is known for. They are aged in a temperature and moisture controlled environment to replicate a cave. Danish Blue is moderate in sharpness with a creamy finish.

Because of its depth of savory flavor, you will need to look for a sweet wine that works alongside the richness. flavor examples include a Port or Sauternes if serving cheese after dinner. For blue cheese based appetizers or entrées, a robust red such as a Shiraz or Syrah will work wonders. Gruyere is a sweet and nutty cheese, which develops a salty earthiness as it ages. Originating in Switzerland, it is often used as the basis for a fondue. It is aged from five months up to a year, giving it a compact and slightly grainy texture.

Grenache or Syrah work well with Gruyere as they are not too rich and will allow the cheese to be the star of the show. For something a little more unusual, try a Cinsault. All of these fruity reds will blend with the sweetness of the cheese to create an exceptional flavor profile. Another Italian imported cheese, Romano Pecorino boasts a firm texture with a fantastic saltiness. Made from sheep’s milk, it has a very distinctive flavor that is an asset to any cheese board. The cheese is pressed with a weight to remove all of the whey and then covered with salt. This imparts the incredible flavour that the cheese carries.

For a full Italian flavour, pair this cheese with a Chianti. This is a dry red wine with high acidity and plenty of fresh berries perfect for the salty flavor of this cheese.

To make this a really fun celebration we suggest picking up our Red Wine Collection, inviting friends and family over, and encouraging each of them to bring a bottle!

If you are looking to add some extra cheeses to your red wine pairing board then Brick, Parmesan, Cheddar, Havarti and Ohio Premium Swiss are all good options.

What are you waiting for? Try our Red Wine Collection today!

There are two types of sheep’s milk cheese known as Pecorino in Italy. The word pecorino without a modifier applies to a delicate, slightly nutty cheese that’s mild when young, and becomes firmer and sharper with age, while gaining a flaky texture. It’s not suited for grating, and though it can be used as an ingredient, it’s best on its own, in a platter of cheeses or at the end of a meal, perhaps with a succulent pear.

Much of this kind of pecorino is made either on the island of Sardegna, or in Tuscany, by Sardinian shepherds who came to the mainland in the ’50s and ’60s, and as a result is generally labeled pecorino sardo or pecorino toscano.

Then there’s Pecorino Romano, which is saltier and firmer; it’s an excellent grating cheese, and also works well as an ingredient because it doesn’t melt into strings when it’s cooked.

In its milder renditions it’s also a nice addition to a cheese platter or with fruit, especially pears, while a chunk with a piece of crusty bread and a glass of red wine is a fine snack.

Though one might expect Pecorino Romano to be made around Rome, and perhaps in the Alban Hills, its production area is considerably wider, extending into southern Tuscany and also Sardegna, which is where the Consorzio per la Tutela del Formaggio Pecorino Romano, the organization that oversees the production of Pecorino Romano, has its offices.

Why would the organization overseeing the production of a Roman cheese have its offices in Sardegna?

To begin with, Romano doesn’t refer to Rome, the city, but to the Romans, who were already making this cheese 2000 years ago; Lucio Moderato Columella, who wrote De Re Rustica, one of the most important Roman agricultural treatises, says, “the milk is usually curdled with lamb or kid rennet, though one can use wild thistle blossoms, càrtame, or fig sap.

The milk bucket, when it is filled, must be kept warm, though it mustn’t be set by the fire, as some would, nor must it be set too far from it, and as soon as the curds form they must be transferred to baskets or molds: Indeed, it’s essential that the whey be drained off and separated from the solid matter immediately.

It is for this reason that the farmers don’t wait for the whey to drain away a drop at a time, but put a weight on the cheese as soon as it has firmed up, thus driving out the rest of the whey. When the cheese is removed from the baskets or molds, it must be placed in a cool dark place lest it spoil, on perfectly clean boards, covered with salt to draw out its acidic fluids.”

Though modern cheese makers use heaters rather than the fireplace, and use calibrated molds rather than baskets, the basic process is unchanged; the curds are heated to 45-48 C (113-118 F), the curds are turned out into molds and pressed, and the cheeses are then salted for 80-100 days: For the first few days they are turned and rubbed with coarse salt daily, then every 3-4 days, and finally weekly. The cheeses are then aged on pine boards for 5 months prior to release. The technique is very distinctive and imparts a characteristic salty sharpness to the cheese. Of course cheese comes from milk, and it’s important too; Pecorino Romano isn’t simply made from sheep’s milk, but from the milk of sheep that have grazed pastures with specific combinations of grasses that impart specific flavors to their milk.

And this brings us back to why Pecorino Romano is made in the Tuscan Maremma and Sardegna as well as around Rome. As I said, its flavor is quite distinctive, and it’s an important ingredient in many south Italian dishes. Those who left the south to seek better fortune abroad during the last decades of the 1800s and the early 1900s were forced to leave almost everything behind, but not their tastes: As soon as they settled they began to cook, and one of the ingredients they needed most was Pecorino Romano. There was no way to make it locally (different climate and forage means a different cheese, even if the production technique is the same), but what was made in Lazio kept very well — Columella remarked on this too, and because of its keeping qualities legionnaires on the march were issued an ounce of Pecorino a day to add to their porridge — so the immigrants ordered it: By 1911 7,500 tons were being sent annually to North America alone.

The cheese makers couldn’t meet this demand with the flocks in Lazio — not all pastures give the proper milk — so they searched elsewhere for pastures that would work, finding them in southern Tuscany and Sardegna.

Currently about 20,000 tons of Pecorino Romano are exported every year, 90% of which to North America.

Pecorino Romano is an excellent source of calcium, and indeed Roman wet nurses were traditionally given Pecorino to enhance their milk. It’s also a good source of phosphorous, potassium, and magnesium, and a good source of protein — a chunk of Romano is about 25% protein. It’s also 31% fat, and though this is significant, people on diets often use it to flavor their foods because a little goes a long way.

Purchasing:
Forms of Pecorino Romano are barrel-shaped and weigh between 40 and 95 pounds (18-40 kg); before release the cheese is marked with a sheep’s head inside a diamond and the rind is stamped with dotted letters spelling out “PECORINO ROMANO.” Given their size, you won’t want to buy a whole cheese, but rather a wedge; if you can, select one from the middle of the form, which will not have the bottom rind. The body of the cheese should be white with faint straw yellow overtones, and break with what the Consorzio describes as a “granitic aspect;” it shouldn’t look too dry.

When you get it home, store it in the cheese box in your refrigerator, wrapped in either plastic or aluminum foil to keep it from drying out.

Make Shisler’s Cheese House your next stop for your own helping of Pecorino Romano!