Home/Holidays/Mardi Gras is Upon Us!

Mardi Gras is Upon Us! 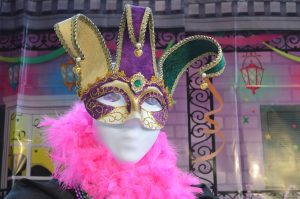 What is Mardi Gras?

A Carnival celebration usually celebrated in the days before Ash Wednesday. Sometimes known as ‘Fat Tuesday’, it is a time to feast before Lent. In some traditions, it is associated with the time all the way from Epiphany up until Lent. One of the most famous Mardi Gras celebrations takes place in New Orleans, but there are famous parties everywhere from Rio de Janeiro to Venice.

Masks and costumes often form part of the celebrations and parades can be seen through cities around the world. Parades and balls are organized by krewes, which will raise funds throughout the year to put on the elaborate floats seen during the festivities.

The History of Mardi Gras

The origins of Mardi Gras can be traced all the way back to Roman celebrations in Europe, when celebrations would be held to welcome spring. Over time, the festivities became wrapped up in the Christian traditions and started to spread.

Mardi Gras first arrived in North America as a French Catholic tradition with the Le Moyne brothers in the late 17th century. The pair were sent by King Louis XIV to defend France’s claim on the territory of Louisiane. They arrived and set up camp around 60 miles downriver of modern-day New Orleans on March 3, 1699, the day of Mardi Gras. In honor of the holiday, they named the place Point du Mardi Gras. By 1703, French settlers in Mobile, Alabama had established their first organized Mardi Gras celebrations. The first krewe was formed in 1711.

There are a variety of different foods eaten around the world during the Mardi Gras festivities.

In the United States, we celebrate with rich foods, as a way to eat them before the deprivation of Lent. Traditional dishes include gumbo, crawfish boil, and beignets (classic French doughnuts served with powdered sugar). The King Cake is usually filled with nuts and spiced fruit and is topped with sprinkles in the Mardi Gras colors: purple, green, and gold.

Over in the United Kingdom they celebrate Shrove Tuesday or Pancake Day. Pancakes, usually in the French crepe style, are served with a variety of toppings. The traditional way to eat them is with a sprinkling of sugar and a squeeze of lemon juice, although many other toppings are also enjoyed.

In Sweden, they delight in the fastlagsbulle, more commonly known as Semla, a sweet cardamom-spiced roll, cut in half and filled with both almond paste and cream. In Finland, they sometimes have a jam filling instead. It is common to eat them with a cup of tea or served in a bowl of hot milk.

Do you celebrate? Let us know how in the comments!