Home/Cheeses/The “hole” story behind Swiss Cheese… Get it?

The “hole” story behind Swiss Cheese… Get it? 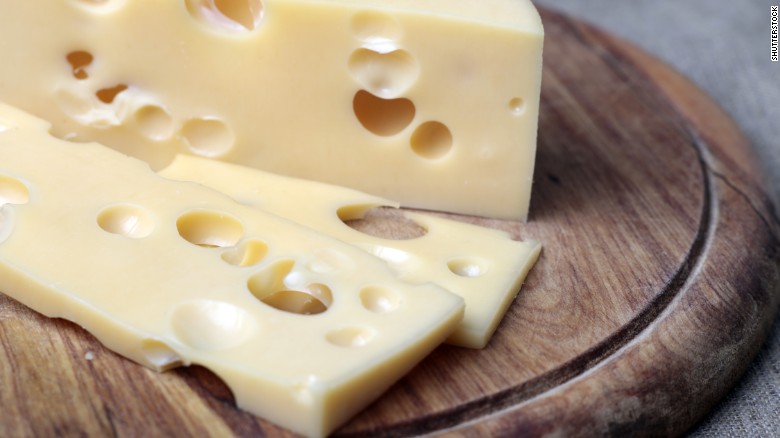 For more than a century, the holes in Swiss cheeses such as Emmental have been attributed to carbon dioxide given off by bacteria. But that’s not the whole story, and now the Swiss have determined exactly why the holes form the way they do.

In recent years, the holes in Swiss cheese – known as eyes – have gotten smaller because processing centers have gotten cleaner, according to the Agroscope Institute for Food Sciences, a Swiss research center.
The old-fashioned barns and buckets of previous years allowed more and larger hay particulates into the process, leading to bigger eyes. John Jaeggi, a researcher at the University of Wisconsin’s Center for Dairy Research, compares the relationship between eyes and particulates to the formation of raindrops. It all goes back to what’s called “heterogeneous nucleation,” he says.
“Rain forms around dust particles, and it’s kind of the same principle,” he says. “With these little specks of hay powder in that cheese body, that’s causing weaknesses in the curd structure and then that’s where the gas is going to form and get your eyes.” It doesn’t have to be hay, either, he adds — other particulate matter can do the same thing.
The basic theory regarding eyes and carbon dioxide is credited to William Mansfield Clark, a Department of Agriculture chemist, who published “A Study of the Gases of Emmental Cheese”in 1912. He used an apparatus of glass cylinders and mercury to capture gas. To make their discovery, the Swiss scientists used a CT scanner and followed the ripening of a cheese over the course of 130 days, Swissinfo reported.
Jaeggi, a third-generation cheesemaker with Swiss ancestors, says the new study has given a longtime belief in the cheese industry hard scientific proof. “They’ve basically put the science behind what was commonly known,” he says.
Be sure to stop by Shisler’s Cheese House and be apart of this “hole” story by diving into some Swiss Cheese!
Tags: shisler's cheese house, Swiss Cheese, what causes holes in swiss cheese